This has been occupying my thoughts for some time since I decided to open up my work to the wider world.  I’ll explain what I do…

From 2002 I have been working as facilitator with top management teams; I have a particular skill in helping strategically minded people engage with those more operationally minded. In essence I help groups of people identify and solve business issues then create clear plans to make the solutions happen.   This makes my work fascinating as well as confidential.

So, how to tell you about my work?

An obvious start is to anonymise the client name, however I work on some very large projects ($100M+) with well-known organisations so this is not enough.

Over the past decade I have noticed several themes emerging from my work with clients large and small.  Using these themes is a useful way of talking about my work without identifying the individual client because each theme will be based on work with several organisations.

So, talking about collections of work preserves confidentiality, let’s have a look at the first.

Thinking back, this collection started with conversations along these lines of : “Hello Adrian, we would like you to help us with some teambuilding…” (My heart sinks when I hear this; I’m not a fan of teambuilding for its own sake)

By the time we’ve talked things through a bit the underlying problem starts to emerge. For example – People in the organisation are just not talking to one another and, more importantly, the customer.

To see why this happens, look at the way organisations are structured. Most are configured for efficiency. 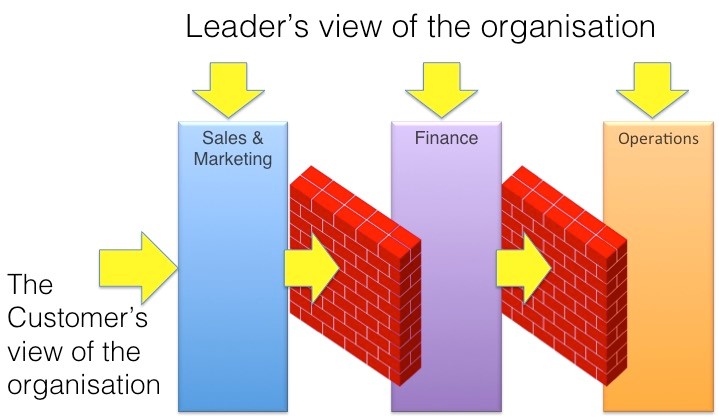 From the leadership position the view is one of clarity of role and reporting down each function. However the customer view is often more of a horizontal slice through the organisation across the functional silos. This interaction frequently reveals the barriers between the silos that are often the source of the frustration as the customer engages with the company.  Time for a specific example…

I received a call from a company to design and facilitate a workshop to enable a customer and supplier to jointly problem solve a critical breakdown in communications on a multi-million dollar project.

Together with the top leaders we designed an approach that started with a safety valve session to help surface the key issues.  This was vital.  The session revealed that the problem was not with the leadership team in the room but in the layers below.  Once this realisation hit everyone the room breathed a collective sigh of relief and the body language softened.

The facilitator challenge that followed was to keep everyone focussed on exploring potential problems rather than getting to solutions too quickly.  When a group of very highly performing individuals get together their natural instinct is to identify a problem quickly and move to a solution.  In doing so they fail to explore other potential sources of problems.  For example, the group initially thought that the problem was primarily behavioural – people were not doing what was expected of them.

In the group problem exploration that followed we encouraged an identification of the barriers that get in the way of smooth working.  Despite the large scale of the project we found that the problem was relatively straightforward.

It turned out that the problem lay in the design of the two organisations: 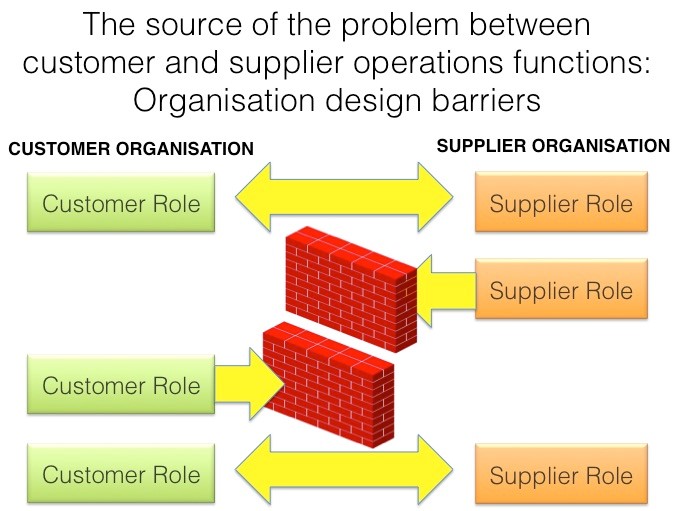 The barriers were caused by a lack of mirroring of equivalent roles in both organisations.

Group working explored this organisation design problem and found a limiting belief that these roles could not be created.  We encouraged challenge to this belief and found that creating new roles in both organisations removed the barriers. 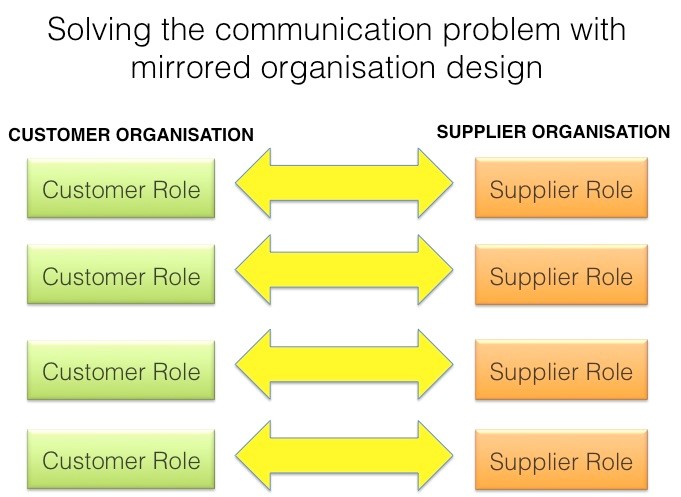 The joint leadership team realised that solving this problem also unlocked another issue of staff retention by providing a mechanism for career progression in both organisations.