An international team led by Manchester University, UK has discovered a fascinating property of graphene oxide membranes. (one micron thick membrane made from graphene oxide (GO) with a flake size of approximately 10 μm).  They found that water would pass through the membrane.  However when they applied an electric current across the membrane the water flow stopped. 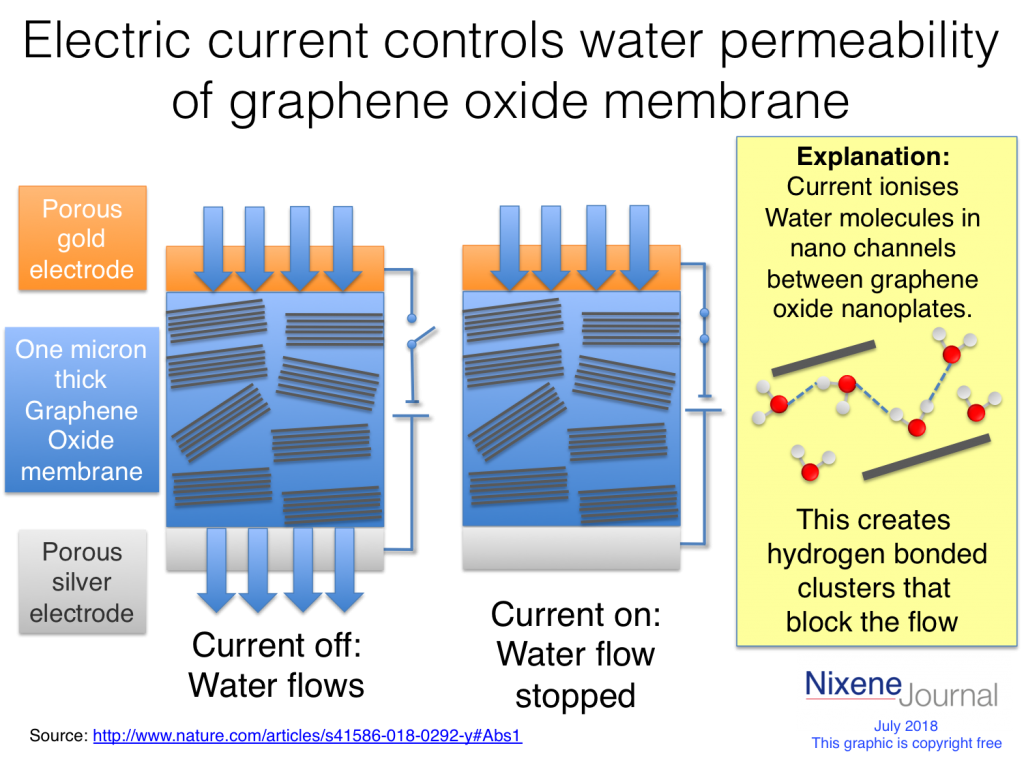 The team found that the on / off switching was caused by water molecules becoming ionised in the nano channels between the GO nanoplates. This ionisation formed hydrogen bonded clusters of water molecules that blocked the flow in the channels.  When the current was switched off the flow resumed.

The paper was published in nature 12th july 2018 this text is hyperlinked to the source.

What this could mean…

The team considered some practical applications of this method in their paper referring to water purification and healthcare technologies .  This discovery could also be very useful for microscopic lab on a chip devices where controlling the flow of water at defined times in a micro reactor would be very useful. There will be many other applications.

Would the team get the same effect by removing the electrodes and using the water on either side of the membrane to conduct the current flow?

This might open another avenue to investigate.  Very fine water treatment membranes are prone to blocking and have to use high pressure inputs that can account for up to 50% of the energy costs in their operation. Reverse osmosis plants in particular have different concentrations of ions across the membrane.  Is it possible that this could create a current flow through nano channels in the membrane?  If so, then blockages at the nano level could be caused by the hydrogen bonded clusters identified in this work.  Finding a way of diverting the current flow could be worth exploring as a method for improving the operational performance of the current technology.