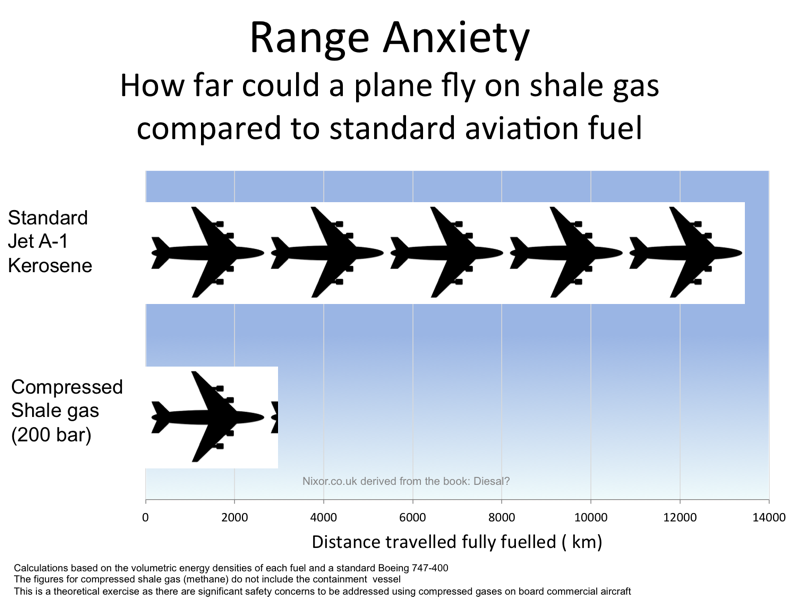 Comparison of Shale Gas and Kerosene powered aircraft. The copyright owner (Adrian Nixon) grants unrestricted use of this image provided you quote the source.

The current fracking boom in the USA and elsewhere is creating new supplies of fossil fuels. In particular, Shale Gas is being found in larger quantities than Shale Oil (Also known as Tight Gas and Tight Oil). Given the abundance of Shale Gas, sooner or later people will ask if we can use gas in place of oil based fuels for transport. So, we have run some calculations to find out how far you would travel.

In the graphic above we used a standard Boeing 747-400 aircraft. Using technical data from the manufacturer we know that the plane can travel 13450 km with tanks full of standard aviation fuel (Jet A-1 Kerosene) To find out how far the plane could fly using Shale Gas, we assumed that the fuel tanks would be changed to take the compressed natural gas (CNG) instead. Compressed gas is already used for land based vehicles and operate at 200 bar (200 times normal atmospheric pressure) To work out how far the fuel would power the aircraft we used the energy density of each fuel. This is a measure of the power contained in each unit volume of fuel. When compared like this, we discovered that the Boeing 747-400 powered by Shale Gas would only take us 2967 km before running out of fuel. In other words, the same amount of Kerosene takes us 5 times further than Shale Gas. This figure would be even less in reality as the tanks would have to be reinforced to take account of the higher pressure of the gas, this is known as the containment volume) So, will we see Shale Gas powered aircraft in the future? Highly unlikely, even setting aside the obvious safer concerns, there is just not enough energy to match the concentrated power contained in Jet A-1 Kerosene. Shale Gas will be used for many things in the future, however air transport will not be one of them.

If you would like to explore the thinking behind this article and where future fuels might come from you can find out more in the book Diesal? which is available worldwide on Amazon: